You are here: Home / About Per Dybro Sørensen

Studied Guitar at The Royal College of Music in Århus, Denmark, with Maria Kämmerling, diploma 1979.

Has given first performances of solo works by Danish composers such as Axel Borup-Jørgensen, Vagn Holmboe, Lars Hegaard and Hans-Henrik Nordstrøm as well as first Danish performances of works by Peter Maxwell Davies, Hans-Werner Henze, André Jolivet, and Luciano Berio.

Concerts in Europe and North America.

Member of the Corona Guitar Quartet.

2002 – 2012 Member of the artistic direction of the Suså Festival for contemporary music.

Per Dybro Sørensen has – since writing music for the theater in the 1980’s – tried to develop a personal way of writing music.

These efforts resulted in the work ”Like a transient punctuation” in 2012. This work develops a technique of variation, based on the infinite row of Per Nørgård.

In 2012-14 he has studied composition with the danish composer Peter Bruun.

In 2019 his work Conversation in Spring won the 2nd price in “2nd Beethoven Composers Competition at the Buda Castle” in Budapest.

He is a member of the Danish Composers Union 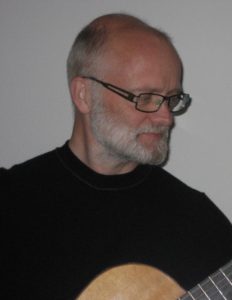